A pâté or terrine of mushrooms and nuts wrapped in puff pastry has long been a favourite dish of mine. It’s wonderful for a special meal. 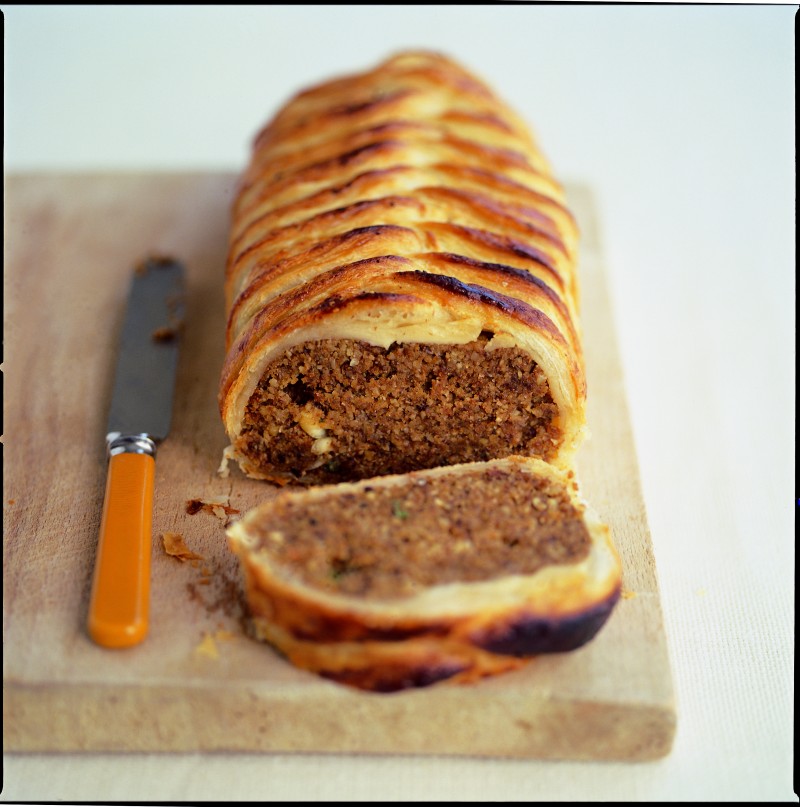 My girlfriend has gone back to being a vegetarian and I had been thinking about adapting a recipe from my childhood; saumon en croûte. The obvious problem was the fish and finding a delicious replacement for it so I stumbled upon this wonderful recipe. I am not an experienced chef, so when I starting making it I thought this would either end up being a great failure, or a wonderful success. It turned out being the latter! She absolutely loved it and I have bookmarked your recipe! Thank you so much for sharing!

And thanks for sharing the lovely feedback, too! So pleased that you like this recipe.

I have made this before and love it. I am making a small version for my Christmas dinner and will take it ready cooked to my nieces as the rest of the family will have turkey. I will have to reheat it, how long would you suggest and how can I avoid drying it out too much and burning the pastry.

Great idea! When you make it, take it out of the oven when the pastry is just crisp and not too golden. Slice it when it’s cool - slices reheat more quickly so you won’t need to worry about the pastry burning before it’s reheated all the way through. On the big day, you’ll be taking your chances with the oven space and oven temperature - the slices should reheat laid flat on an oven tray within 10 minutes but if necessary, be prepared to cover them with foil so they’ll continue to heat without burning. Take enough to share, you never know!

Hi,
I have a similar dilemma. Travelling up north a few days before Christmas. Could I make it to the pastry stage and freeze it to travel up and defrost thoroughly before Christmas day?  Like the idea of slicing it to heat it up due to big bird in the oven!!

If you make it up, including wrapping it in pastry, you can freeze it - but I wouldn’t do it that way, for two reasons. Firstly, if you’re using puff pastry that has previously been frozen, it’s bad practice to refreeze. Secondly, freezing it when it is all made up creates a very solid frozen brick that will take a long time to defrost, so you have the choice of either defrosting until you are sure the centre is soft (by which time the pastry will be very soft and might not puff up in the oven), or defrosting only part way and hoping that the heat of the oven will penetrate all the way before your pastry starts to burn.

If you want to get ahead it’s a much better idea to prepare the filling and freeze that, in a bowl covered with cling film - then defrost the night before you assemble and bake the dish.

If you want to reheat it in slices, you really need to make the whole thing, cook it until just pale golden, and allow it to cool. If you assemble the dish and then try to slice it without cooking, the filling will fall apart.

By the way, this recipe also makes good sausage rolls - and they can be successfully assembled and then frozen without cooking. Because they’re small you can bake them from frozen.

Have a lovely Christmas!

Thank you so much posting the recipe. We made it for christmas dinner this year and all agreed (family of 4 vegetarians and 1 meat eater) it was the best christmas dinner in 23 years!!
I made the filling the day before, and then easily assembled on christmas Day. Very easy.

It is Easter today and just about to make again for some friends and family, I am sure it will be a similar success.

I’m going to try and make this over the weekend served as an entree, thought it would be nice to put a ‘blob’ of something on the side to accompany it. Hommus, babbaganush I thought might be too strong, can you suggest something, doesn’t matter if its store bought. Thank you

I have this recipe from a 2003 vegetarian magazine. I have made it several times, mostly for Christmas. It is absolutely delicious hot on the day and cold for several days after. Great recipe!!

this looks good and I will see if I can get around to trying it.  I have a question though - yeast extract in the filling?  That does seem curious.  You could be meaning nutritional yeast at all, perchance?

This is a great recipe I’ve used for years however I have tweaked it because of a nut intolerance my partner has, so I used chestnut puree and a few dried roasted chestnut blended in instead of the cashews and almonds (and a good slug of red wine, because.) I should probably compensate for the extra moisture but it hasn’t has a complaint yet!

Thank you for sharing this recipe - I would love to make this for dinner tonight. As an American, the store-bought puff pastry that is most popular stateside comes in a box of two “sheets” which are individually wrapped and which altogether total 1 pound (each sheet is 1/2 pound). Would you recommend that I use both sheets together, layered one on top of the other, to make this dish? Thank you in advance for your thoughts and assistance.