Pancake Day, known as Shrove Tuesday or Užgavėnės [ush-go-ve-ness] in Lithuanian, directly translated means ‘the time before Lent’. It is celebrated the night before Ash Wednesday: similarly, to Mardi Gras in French, meaning ‘Fat Tuesday’. Being the last day before Lent it’s seen as a time to fill your belly with all the things that you will miss during Lent. As the traditional saying goes: "Eat until your belly is tougher than your forehead."

Keep reading if you’d like to learn a bit more about some Lithuanian traditions that you might not have heard about before.

How is this Pancake Day different? 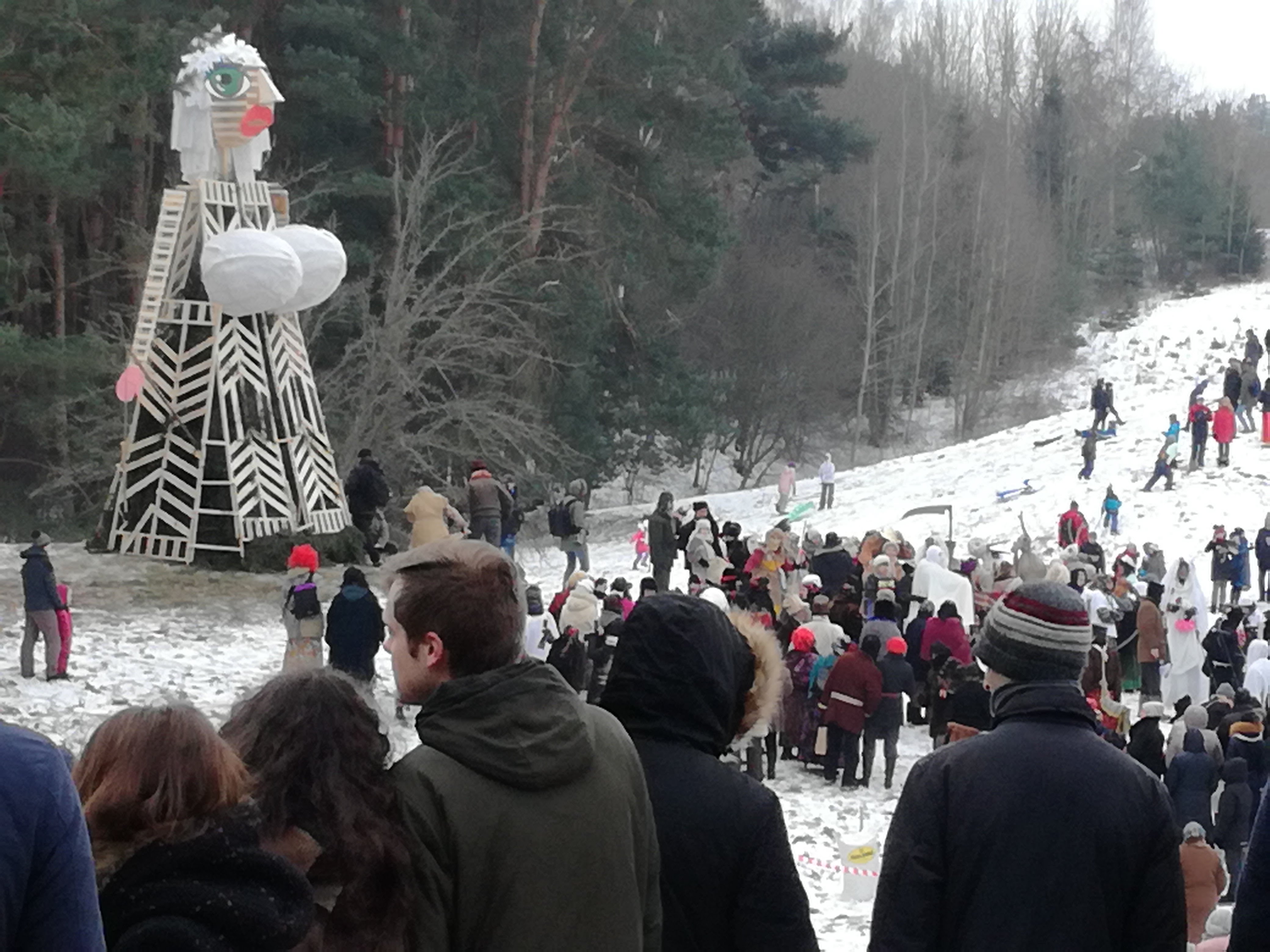 Užgavėnės is celebrated in a very similar way to Halloween, just for a different reason (Lithuanians don’t celebrate Halloween because of some traditions taking place on 1 November). The purpose of Pancake Day is to scare the winter out of your garden and ensure a good harvest by encouraging an early spring.

Originally, this old carnival was celebrated for an 8 day period; nowadays it takes place over 1 day. It symbolises defeating the winter and is celebrated in the late evening. In city centres, and even forests, a festival with old rituals and games takes place every year. Adults and children gather wearing predominantly homemade face masks to pretend to be devils, witches, goats, or a combination of all. The full costumes are always welcomed, mostly worn by children, made from old clothes. Everyone dances to scare the winter away. 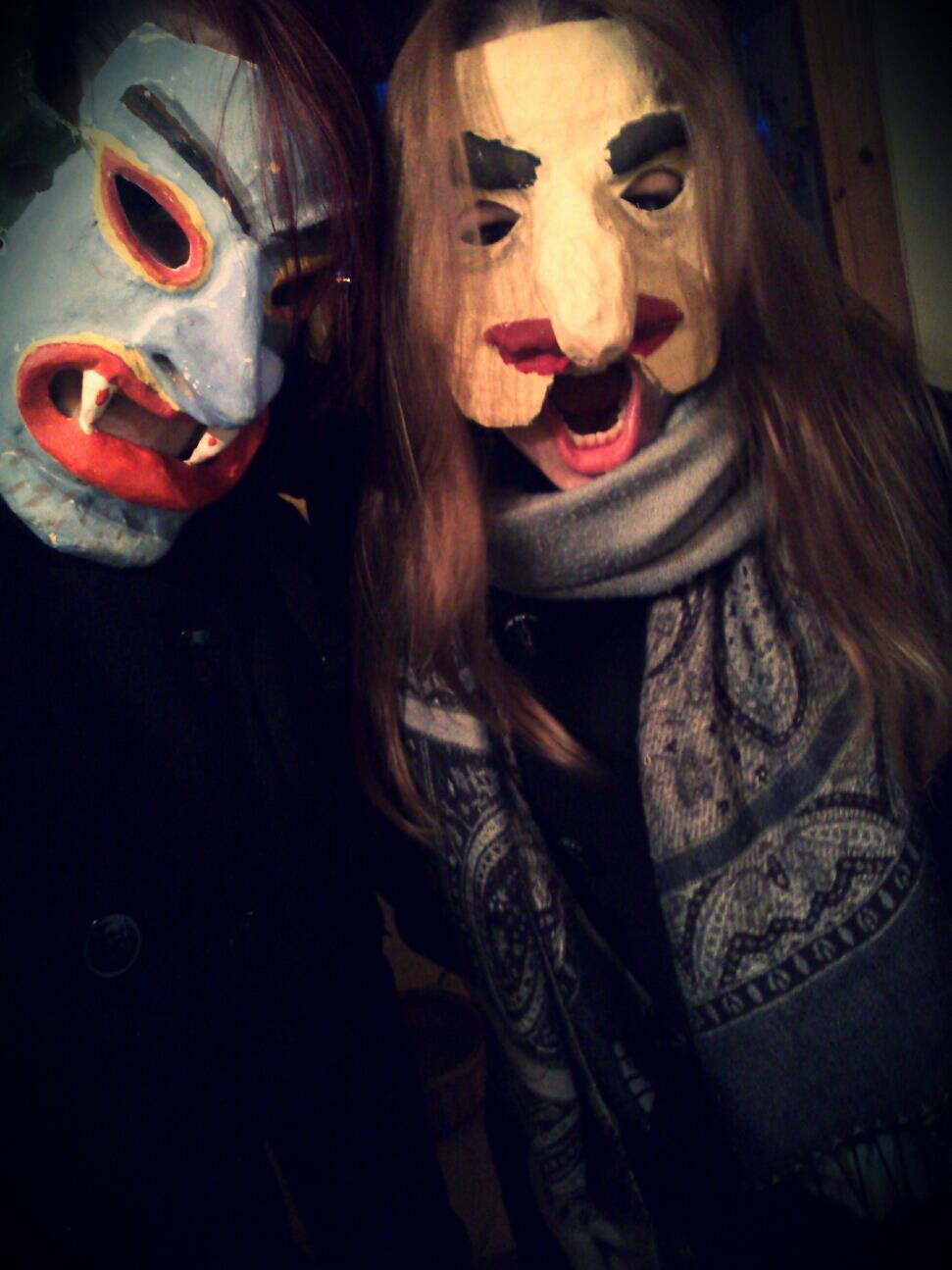 Meanwhile, the fight of the ‘porky’ known as lašininis against the ‘hemp men’ – kanapinis, takes place. The fat ‘porky’ represents the winter and being greedy, while the slender ‘hemp men’ represent the spring and hard work. People dressed as these characters put on a good fight using potato sacks stuffed with hay, just like a pillow fight. People who love snow and winter cheer for the ‘porky’ and the ones fed up with the cold, -20 degree temperatures, cheer for the ‘hemp-men’. Most commonly the ‘hemp men’ win, which means that spring will take place.

Throughout the evening, people drink, play games, dance and most importantly eat pancakes. There are plenty of food stalls selling traditional ring-shaped rolls to be worn as a necklace and eaten as a snack by breaking it off. Potato pancakes (similar to hash browns) are traditionally served with lots of different toppings and washed down with hot beer. 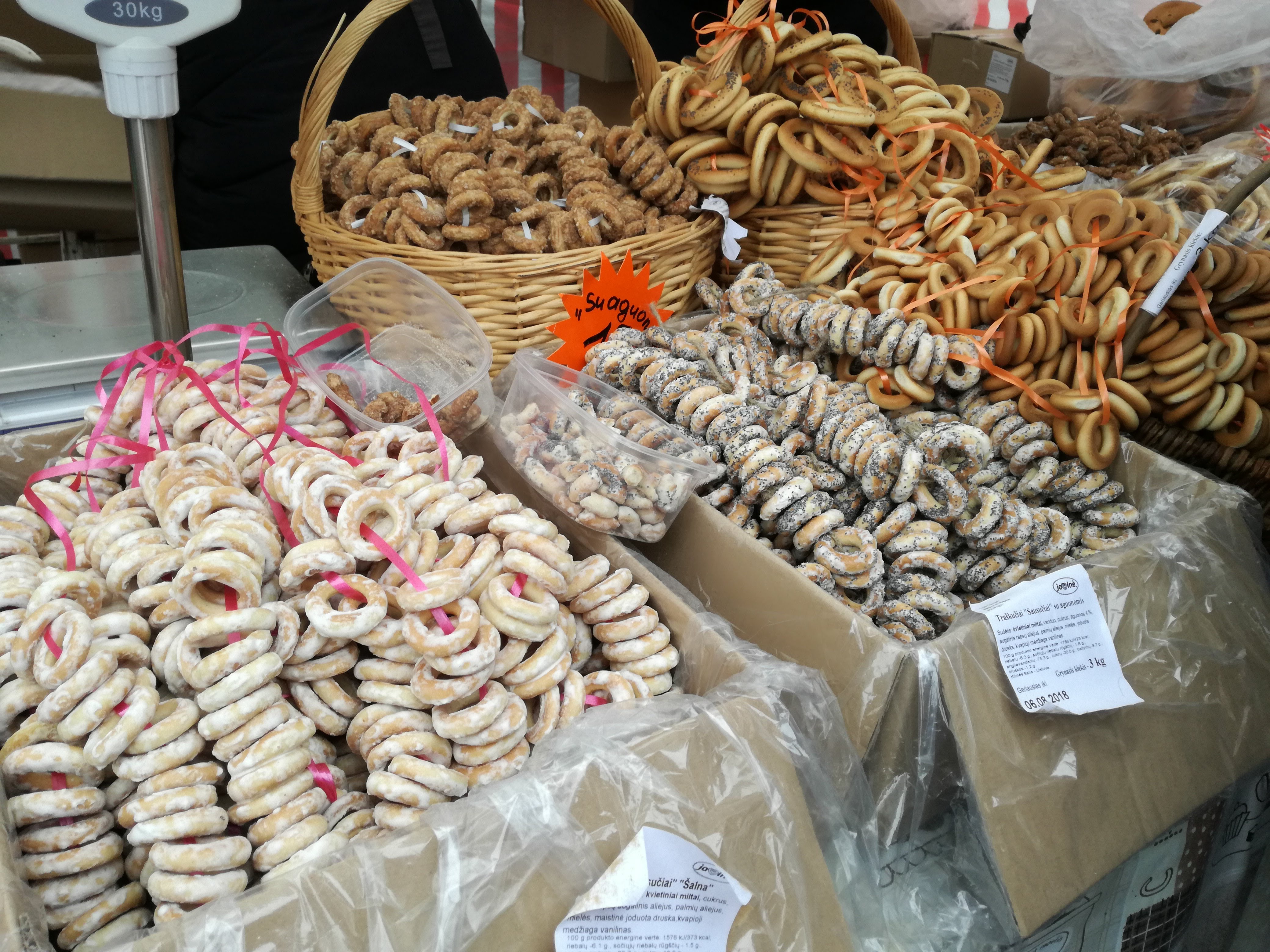 When it gets dark there is a final part of the celebration to burn a fat effigy of winter called ‘Morė‘. This effigy is commonly made from hay stuffed potato sacks or old clothes. A small carnival takes place, if ‘Morė‘ is small enough to be carried around for the walk toward its designated spot. This representation of winter is placed on a large pile of wood. Then everyone shouts: ‘winter, winter leave our garden!’ a couple of times. After this, the effigy is set on fire, and people dance or cheer. This sometimes takes hours to complete, since some effigies are huge. When the ‘Morė’ is burnt the winter is considered to be gone and spring takes place.

How is this similar to Halloween?

As mentioned previously, children dress up in costumes and they have a wicker basket per group. Before the festival, the children will knock on their neighbour’s doors similar to trick or treating.  They then sing a song and perform a dance. At the end of the small performance they state: ‘"We want pancakes and coffee and if pancakes have not been mixed [meaning batter has not been made because of laziness or poor planning] you will need to find some change [in order to pay for the performance and for not being prepared!]"

Adults tend to give fruits, chocolates, pancakes or money. The children usually bring a tub to collect pancakes. At the end of the evening the gatherings are shared.

The pancake symbolises the Spring’s sun. Throwing pancakes into the air is a very old Baltic ritual symbolising a sacrifice for the Sun, inviting her to come back sooner, to warm up the Earth and take away Winter.

Traditional potato pancakes are made using a special fine grating machine to achieve a very fine potato mixture. You can get a similar texture using the side of your box grater, the sharp side, which might be used for zesting citrus fruit. I have to warn you, this side is not finger friendly, so take care when using. I would highly recommend cutting the potatoes in half before grating. Or using the smaller grater side (‘shredder’ style). Using other grating ‘styles’ would make the pancakes more like hash browns but would not affect the taste.

These pancakes are served with a variety of toppings to add flavour. Toppings include: sour cream and dill; cottage cheese with garlic; apple sauce (yes, really); or béchamel sauce with mushrooms and fried onions. Unfortunately, this Eastern European cuisine traditionally contains a lot of animal products and rich foods, so a lot of toppings would be served with meat. I would recommend using meat replacements such as smoked carrot ‘salmon’ or oyster mushroom cubes fried with some liquid smoke. The potato pancakes can be filled with soya mince and topped with creamy, oat fraiche.

If you’re not a fan of potato pancakes, crepes with different fillings are often eaten on this occasion for the main and the dessert, as well as yeast pancakes. I have provided a couple of recipes below if you would like to try a different style of Pancake Day this year.

I would recommend using 1 large potato per person as a portion.

I recommend using starchy potatoes such as: Maris Piper, Desiree, King Edward, Russet or red potatoes. Using these potatoes will avoid too much water coming out during grating, making the mixture too wet. 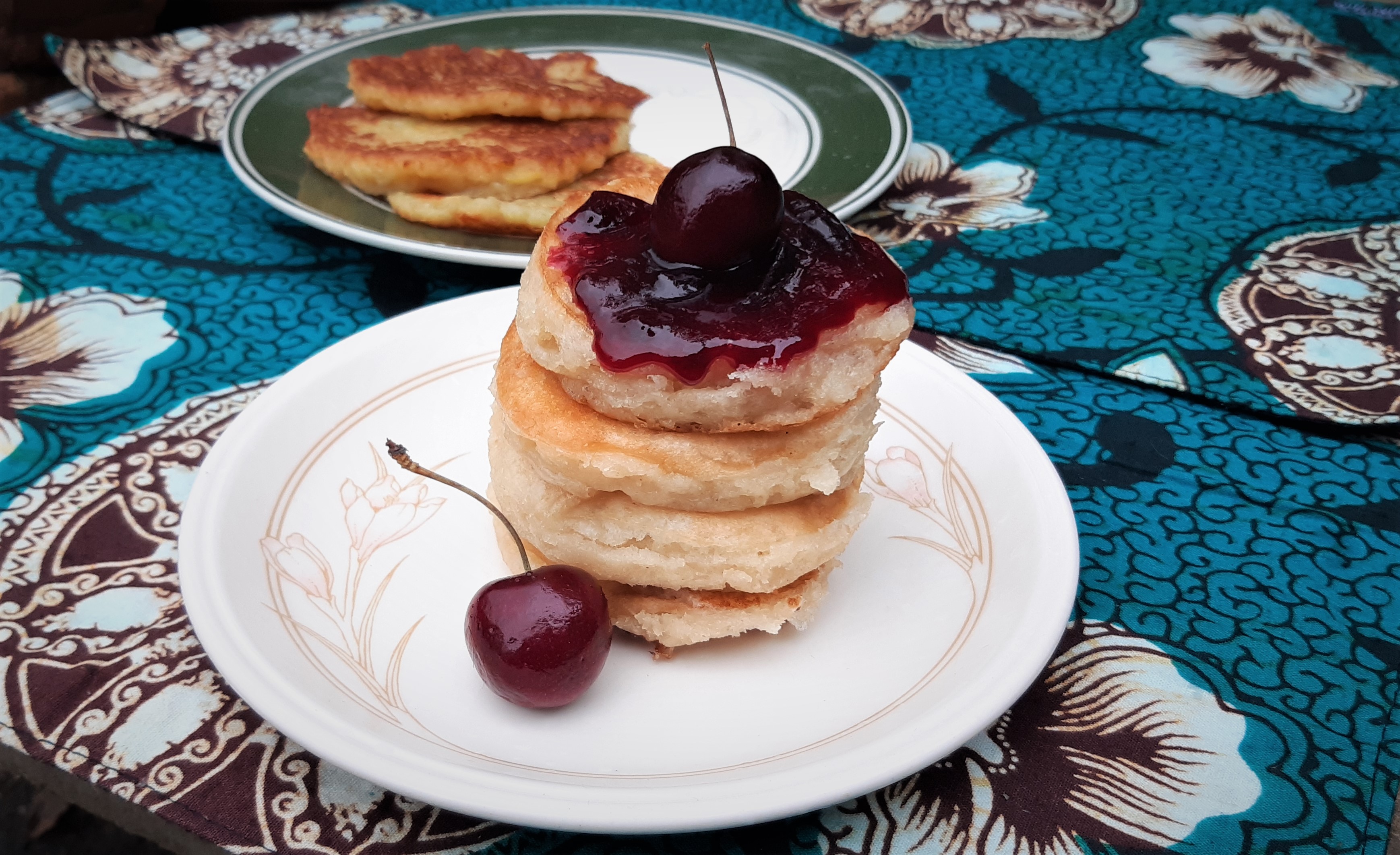 So, next time you book your holiday to Lithuania, don’t miss this time of the year when there are fewer tourists, but still some traditional festivities, perhaps a lot of snow, and of course plenty of pancakes. Happy air flipping toward the sun!

Recent posts in Articles and Recipes